GEAR UP FOR PLAYOFFS

While it was the last game of the season and the Roughriders have already clinched a playoff birth, the final regular season game against the Hamilton Tiger-Cats went anything but smoothly.

The game may have ended with a lopsided score favouring the Hamilton Ticats – the Roughriders were out to make the game as exciting as possible without exerting their first-string roster. As a result, Hamilton took Week 16 as both teams head into the Semi-Finals.

This week, we asked Roughrider fans what they think it will take to win against the Stampeders, and besides the obvious remark of needing to score (I see you), some fans say the Riders need to “focus,” “play aggressively,” and “catch consistently.” I mean, they have to do a bit more than just score to beat the Stampeders, am I right!?

OFF TO THE PLAYOFFS

It looks like Rider fans are holding their Grey Cup confidence close again to their chest this week, as their opinion has not waivered from staying neutral since Week 12. As a result, the GCCI rises ever so slightly from -2 to 5 in Week 16.

So my fellow melon heads, as the Roughriders go into the Semi-Final against the Stampeders, what do you think they will have to do to advance to the Winnipeg Blue Bombers? Do you think they have what it takes to beat Winnipeg?

The West, again this year, is as strong as ever! Let us cheer on the Green and White and send all the positivity their way before the playoffs! 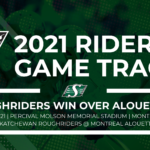